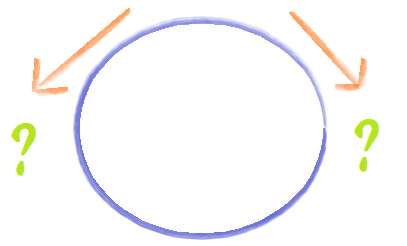 The concept of orientation looks so magical if we think of various formulations all describe exactly the same mathematical phenomenon, while they are all rooted on the classic idea of choice of direction, right or left, plus or minus, or man or woman.

To put out the algebraic view of orientation, consider finite discrete set

induces the unique choice of direction for each permutation. In case of

, it coincides with the common sense of orientability:

corresponds to the right and

corresponds to the left.

For its connection with topology, we think it is important to describe the case when a space is manifold so one can study further variants (e.g. pseudo-manifold, vector bundle, etc.) derived from the case of manifold. It is notable that the orientability is preserved by homeomorphism but not a homotropy invariant (compare mobius band and a circle for example).

Thanks to its locally Euclidian property (and its consistent dimension), the orientation can always be defined locally on topological manifold

; but not for globally over

be a commutative ring with unit. For a topological n-manifold

to a generator of

to see an element of

. Then we have a fiber

with an open basis

is a collection of an element

is the image of

by the canonical map

is a covering space with local triviality condition

denotes a generator of

A section of a covering space is a continuous right inverse of covering projection. The orientation is the section

. Note that by construction of the covering space, a section encodes local consistency (of a local orientation) if and only if the section represents the orientation:

has local consistency if for each

, there exists an open neighborhood

such that for each

is the image of

be a manifold of dimension n and let

be a compact subset. Then:

is a section of the covering space

, then there is a unique class

be the set of sections of

. Sum and scalar multiplication of sections are again sections, so

is a R-module.
The lemma indicates that the homomorphism

is connected, then the evaluation map

is injective, since the value of a single point determines the given section uniquely.
For it to be surjective, consider the case when

, which is to say when

is a closed manifold. The composition

is surjective if a section exists such that each point

is sent to a generator

is an unit of

(Note that a section

always exists for each

is the canonical map).

be a connected manifold. For n-sheeted covering projection

is homeomorphism for any component

The proof is straightforward.
If

is homeomorphism, then for any component

, there are no distinct two points

so each fiber can intersect only once with each component. This shows that the number of components of

is connected, a choice of point in fiber determines the component uniquely (owing to path lifting property), we conclude that

, contradiction.
For the reverse direction, if

has n components, each point in fiber distributes evenly to each component, implying that

is injection (as in previous discussion). Because the fiber cannot be empty,

must be surjection onto

Now that we introduce a remarkable result for a case of closed manifold:

be a closed connected n manifold. Then:
(a) If

is an isomorphism for all

is injective with image

For the last part of (b), identify

of two sheeted covering with coefficient

gives homeomorphism, we have

. Because the image of the map

is exactly the sum of such

, it follows the result.

It is remarkable that every manifold

-orientable, without assuming that

is compact or connected (to remove the without boundary condition, we need to treat collar neighborhood properly, which we would not do in this article). This is because the homeomorphic covering projection

can be defined, or the section

suffices local consistency since the isomorphism