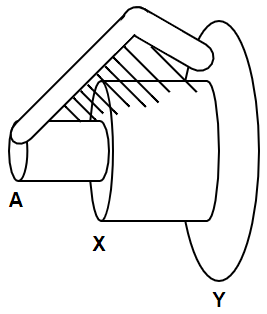 I often forget the conceptual background of these well known universal constructions. This bothers me especially when I need to give a new mathematical instrument the conceptual meaning as the extended or restricted version of limit or colimit. Here I write of limit/colimit that include definitions and some concrete examples of instantiating the concept, in order for reminding me of least rigoristic idea that activate the lost memory.

are categories and functors

is a category composed of a triple

as an object and the morphism

is a pair of morphisms

(we write these only as

) that commutes the following diagram:

can be regarded as the functor

. In this sense, when both the functors

, then the corresponding comma category is exactly the hom-set written as:

is called index category, usually taken to be small or finite). The diagonal functor

is the functor that maps for each object the constant functor

, and for each morphism, the morphism function that assigns each index constantly to the given morphism as in the diagram:

be a functor. If exists, the initial object of comma category

as to fit in the sequence

, is called the colimit (of

be a functor. If exists, the initial object of comma category

as to fit in the sequence

, is called the limit (of

Example 1. Coproduct is the colimit of

, regarding the corresponding functor

as indexed objects. We usually denote

for the coproduct of given indexed objects. In the following diagram, the colimit as the universal arrow is

be a category of two objects

. Then an object of the category

is exactly a pair of morphisms, also denote

. We call the colimit of

can be represented by a commutative diagram:

such that for any

, there is unique morphism

that commutes the following diagram:

is the category of abelian group

or the category of

for a certain ring

, then an object of

is again of the same shape, namely

hence the colimit of

that for any pair

such that the following diagram commutes: